Dr. Ramachandran graduated from Kilpauk Medical College in Chennai, India in 1999. She completed her pediatric residency at the Bronx Lebanon Hospital, Albert Einstein College of Medicine in New York City in 2005. She worked at the Margaret B. Shipley Child Health Clinic in Canton prior to joining Canton Pediatrics in January of 2012.
Dr. Ramachandran is a board certified pediatrician and is a Fellow of the American Academy of Pediatrics. She takes special interest in adolescent medicine and treating patients with asthma and ADHD.
She lives in Jackson township with her husband, Dr. Nagajothi, and her daughter Shreyaa and son Shiv. 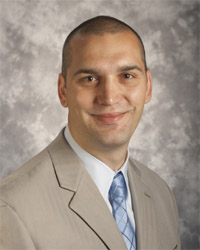 Dr. Shaw grew up in Medina, Ohio, and completed medical school at Case Western Reserve University College of Medicine in 2005. He completed his residency at Akron Children’s Hospital in Akron, Ohio. After serving as Pediatric Chief Resident at Akron Children’s, he worked in the pediatric emergency department prior to joining Canton Pediatrics in 2010. He is board certified in pediatrics and is a Fellow of the American Academy of Pediatrics.
He is on the clinical faculty with Northeast Ohio Medical University. He is on the active medical staff at Mercy Medical Center and Aultman Hospital.

Dr. Thiruppathi graduated from Stanley Medical College in Madras, India. After completing his residency at Wilmington Medical Center in Wilmington, Delaware, he started his medical practice in Canton, Ohio. He was one of the founding physicians of Canton Pediatrics.
Dr. Thiruppathi is board certified in pediatrics and is a member of the American Academy of Pediatrics.